There has been some lively discussion as to how to process the great new holographic recording material from Russia, the Sphere-S brand of plates distributed by Geola of Lithuania, affectionately called GEO-3. It is an ultra-fine grained panchromatic emulsion, similar to the Slavich PFG series of -03C and -03M.

I had told Hans that I did not succeed with that emulsion until I followed TJ’s (Dr. Tung Jeong) processing scheme which starts with a 30” immersion in cold running water, like only the cold side of the faucet turned on, which in Chicago is about 50F (10C). (Sorry my metric colleagues, I myself am metrified, but my trusty Weston Dial Thermometer which I have used since the ‘70’s is calibrated in Fahrenheit only.) Then 30” only in the JD-4 developer, more cold water for 2-3’, bleach until clear in a Kodak R-10 derivative that I call TJ bleach since I first saw it on an Integraf mimeographed handout when 8E75HD first came out. (2 g Potassium Dichromate, 2 mL Sulfuric Acid, 30 g Potassium Bromide) Another cold water wash 3 – 5’, Photo-Flo and air dry.

I told Hans that this really works, and although not skeptical, like a good holographer he wanted to see it for himself. So on his latest excursion from the UK to the US, we tried it.

Set up the classic waffle iron standard object, used 532 nm from my cherry Compass 315M, got 180 microWatts per square centimeter (μW/cm2) flux, and exposed some 62 mm square plates for 3000, 4200, 6000, 8400 and 12,000 microJoules per square centimeter (μJ/cm2) exposure doses. (This was a series of exposures where they were differed by half-stops.) Processed exactly as described above. Results below.

They were all great, but it seemed that the 6000 μJ/cm2 was the best for brightness and signal to noise when looking at the holograms in person. The 8400 μJ/cm2 appears a bit brighter in the photo, probably due to some extra developed noise. The 12,000 μJ/cm2 seems dimmer because it’s on the downhill side of the curve. Hans was nicely surprised! Especially when it was proven that there was no emulsion shrinkage as the plate was replaced on the object and illuminated with laser light and got a nice shadow on the object from the plate stealing the beam from the object and turning it in to a reconstructed wavefront, plus it was nano-positioned manually until we got real-time fringes! This was the first time that I had shot this material in the green, having proven to myself that the cold water processing worked well with the material using He-Ne red previously, and I was amazed again, since the shorter wavelength recordings are more difficult. (One of these days I will get some blue photons!)

Then we tried the processing scheme that he was most comfortable with, the traditional CWC2 developer but with a hardening step before it. Shot 3000, 6000, and 12,000 μJ/cm2 exposure doses, and pre-hardened with formaldehyde, (per the Slavich instructions, 10 mL of 37% Formalin solution, 2 g potassium bromide, 5 g sodium carbonate), a quick rinse to remove the formaldehyde, and then into the catechol and ascorbic acid stew at room temperature, 70F (21C), same bleach as above, and air dried. One other plate had been exposed at 6000 μJ/cm2, and slipped in along with its brethren in the developer but without having been pre-hardened.

While they were pre-hardening for 6 minutes I was complaining that this was such a nasty step, the typical bargain basement holographer like myself doesn’t want to have formaldehyde around, how do you get it unless you are an undertaker (and I do have an undertaker friend who was a former holography student, so that’s how I have it), and so on about this stuff. So why would first Slavich and now Sphere-S want to have to include this nasty step in their scheme?

Hans took credit along with Dalibor Vukicevic in implementing the formaldehyde pre-hardening step for this class of materials, the PFG-03M, -03C and now GEO-3. There is a very real need for this nasty step because the gelatin needs to be softer than typical photographic products to let the silver halide crystals precipitate to the ultra-fine grains in these emulsions. They had tried various other pre-hardening formulations, without the embalming fluid, but they did not work as well as this stuff.

This trio held their own brightness-wise with the first set of 5, however they were noisier. Here are the 3 pre-hardened CWC2 holograms. Anyone would certainly be happy with these!

Checking out the same exposure doses but different processing side by side, the CWC2 replays noisier. 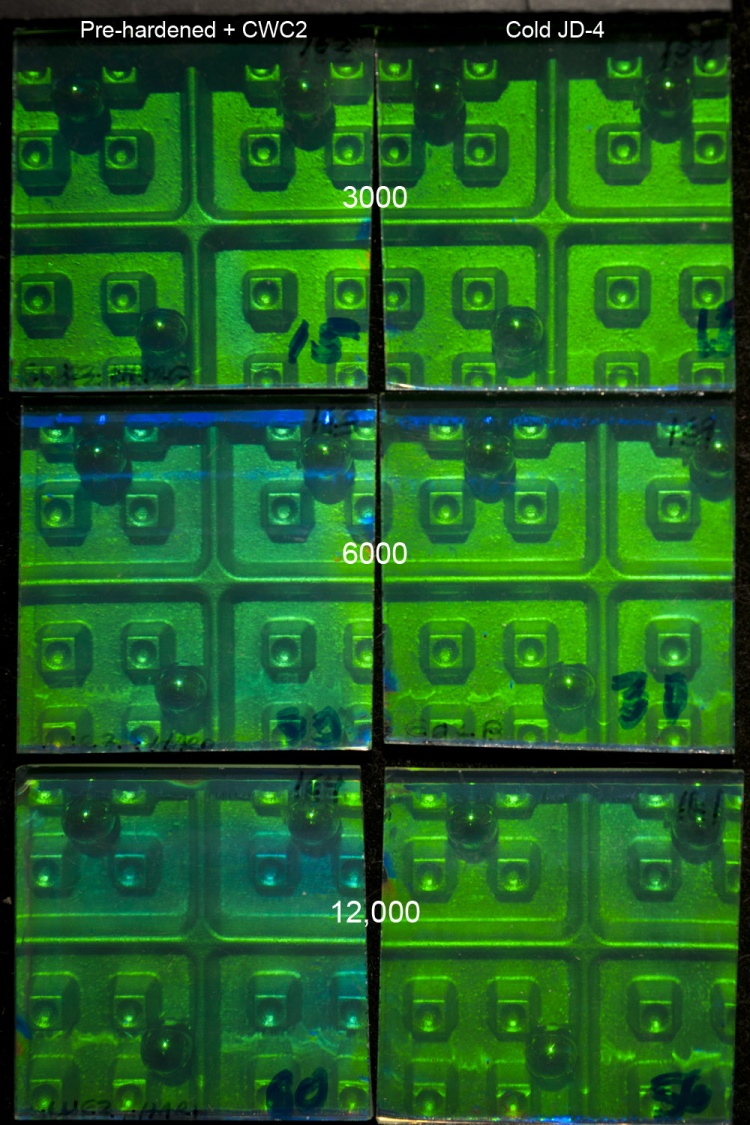 Because of the longer development time film grain noise could come up spontaneously, so this picture below compares the CWC2 3000 μJ/cm2 exposure dose to the cold JD-4 6000 μJ/cm2 and the CWC2 is still noisier. Inspect the shadows and the dark areas in the ball bearings that hold up the plate. Possible further exploration would be to try the CWC2 developer either cold, and/or shorter immersion times. 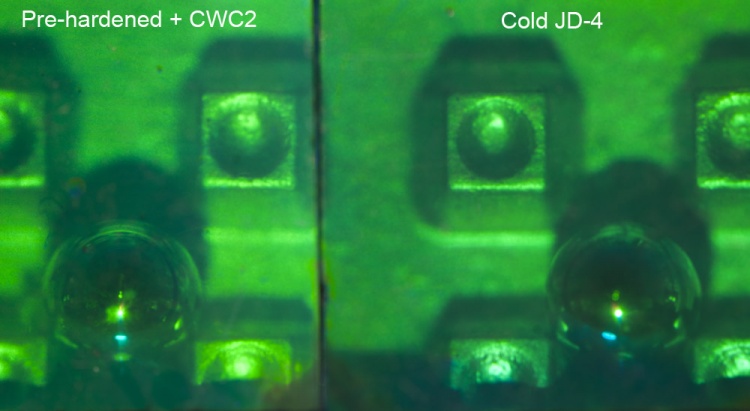 But what was proven conclusively is that this material really does need the hardening step! The holo on the left was not pre-hardened, but processed in the same batch as the others that had received pre-hardening. There is a shift to shorter wavelengths, the shift is random, and it seems like the gelatin distortion made the image less sharp! (Both 6000 microjoules per square centimeter exposure.) 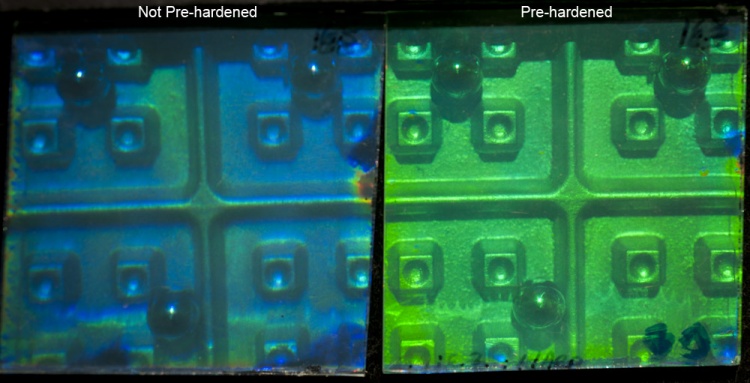 Another plate was exposed at the 3000 μJ/cm2 exposure dose and soaked in cold water before the CWC2 room temperature baths, and although it didn’t shrink as badly as the untreated plate, it still had some unacceptable flaws. 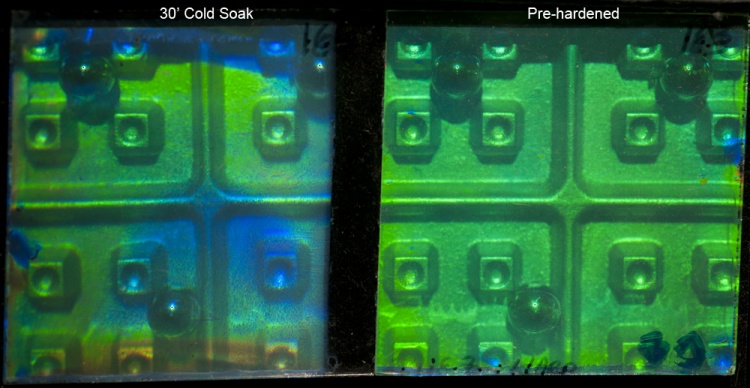 Perhaps a longer soak in the cold could have helped, and/or the process continued at the same lower temperature like the first set.

Conclusions: The Sphere-S GEO-3 is my emulsion of choice, in spite of its low sensitivity. Its soft gelatin, necessary for precipitating the ultra-fine grains, needs something to harden it so that it doesn’t distort under the duress of development.

The formaldehyde hardening step introduced by Hans and Dalibor really is necessary. But TJ came up with a much more palatable solution, possibly inspired by the fact that gelatin desserts need to be refrigerated to become solid, with the cold water pre-hardening step toughening up the protein strands so that the coating thickness doesn’t change between the exposure and replay steps.

Another advantage of the cold process with its developer temperature of 65F along with the short immersion is that the random development of grains that contribute to noise is suppressed, making the shadow areas nice and dark, for higher contrast and signal to noise ratio. Look at the same shadow areas in the JD-4 developed and CWC2 areas; the ball bearings should have no haze in their images.

These short developing times and the low processing temperature run counter-intuitive to previous photographic printing experience. If a photographic print is developed in too cold of a solution, the blacks in the shadows never reach a decent density. Short times of immersion would not allow the density to build up properly, either.

But this type of silver halide material is an altogether different beast, and it looks like I have finally found a way to process it to get the best results!

Embarrassing Postscript: Looking at the photos on the monitor at bigger than life exposes some blemishes like the blue spots at the edges caused by my sweaty paws during handling, plus my inconsistent cutting of a large plate into the 63 mm chunks. Cleanliness is next to godliness in the image-making world! Hopefully the reader will be more careful than myself when making their final display hologram on what appears to be the silver halide holographic record material we have been waiting for!