More information can be found at Brewster's Angle and Polarization:

You want to reduce reflections between surfaces, so as not to get woodgrain. So you should make sure your reference beams are p-polarized. In this way, you will always get less reflection than s-polarized light.

Now, if you want to be sure you get no reflection, then you should use p, and come in at the Brewster angle.

But holography is a compromise, and always having to use Brewster is limiting. So, we can use other angles, knowing that at least we are getting less than we would with s polarization.

Look at the graph showing the reflectivity of the two states: 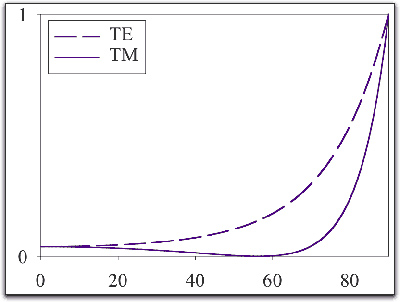 At zero incidence, around 4% of all light is reflected. As we increase the angle of incidence, the reflected portion of the s light, dashed curve, steadily increases. But p decreases first, going to zero at Brewster's angle, and then increases.

Now take 45 degrees. With s, you get around, say, 8% of the light reflected. With p, only around 1%. So you have dramatically reduced the unwanted reflection beams, and not used Brewster.

I'd like to share a technique I've discovered which prevents "wood grain" fringes, and increases both the brightness and "viewing zone" of image-planed reflection holograms. It's based on the material Polaroid used to make to reduce glare off computer screens, which is a circular polarizer laminated to a linear polarizer (I believe the product number was HNCP-36).

I was using p-polarized light in the collimated reconstruction beam for my 30x40cm H1s, and p-polarized light in the collimated reference beam (at approximately Brewster's angle) for the H2. The system was laid out flat on the table, so that all incidence angles were parallel to the table. The problem was that the light comming from anywhere on the H1 that was out of the plane of incidence was no longer p-polarized when it hit the H2 recording plate! This effectively decreased the efficiency of the gratings formed by those rays (the skew rays) and the collimated reference beam.

My solution was to use the HNCP-36 as follows: A) the HNCP-36 was cut so that the linear side was parallel to the edges of the piece (as opposed to being at 45 degrees as supplied), B) the HNCP-36 was index-matched to the emulsion side of the recording plate with the linear side toward the emulsion and oriented to pass s-polarized light, C) the reconstruction beam for the H1 was made to be circularly polarized, and D) the reference beam for the H2 was made to be s-polarized.

The use of s-polarization at the H2 recording plate provided maximum fringe visibility regardless of the angles of incidence, therefore increasing the overall efficiency of the hologram.

"Wood grain" fringes were avoided because: A) the linearly polarized reference beam passes through the linear polarizer, B) it's made to be (let's say right-handed) circular, C) reflects off the polarizer-to-air interface as (in this case left-handed) circular, D) becomes linear again after passing back through the circular polarizer (but now its polarization has been rotated by 90 degrees), and E) is absorbed by the linear polarizer before hitting the emulsion again.

The downside of this technique is that it is wasteful of light. The resulting holograms, however, are brighter and stay bright all the way to the edges of the viewing zone. Also, the use of Brewster's angle is not necessary for the H2 reference beam. As Keveh pointed out, a little "wood grain" on the H1 is tolerable and the small amount that results from this technique is generally not noticed in the final image.