It is easiest to use your light meter perpendicular to the beam you are measuring. Read this discussion.

This is the light meter recomended in "Holography Handbook" and is no longer being made. Once and a while they are available used. They work well and are inexpensive. Their biggest advantage is you can use the readings and directly try the projects in "Holography Handbook" however since AGFA is no longer being made it is not that important anymore. 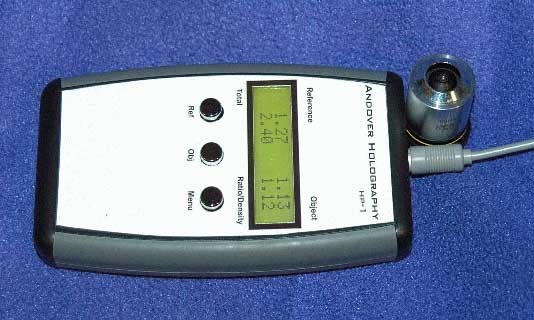 The HP-1 is a new lightmeter designed using current technology expressly for use in the making of holograms. It was designed to fill the void left by the Science & Mechanics meter. The HP-1 is a precise hand-held instrument for measuring light and exposure levels for holography. It measures CW laser light over a wide range of power levels from microwatts to over 100 milliwatts. Using the supplied photocell, the HP-1 provides real time readings of light levels. Readings can be taken separately for the reference and object beams, and the HP-1 will compute and display the beam ratio and total power. The HP-1 can also compute optical density (OD) based on two readings. Sporting a two-line alphanumeric character display, the HP-1 provides trending of real time readings which makes it easy to adjust optics, mirrors, lasers, or spatial filters for maximum performance. The battery powered HP-1 comes with a large area (8 cm^2) photocell, which is calibrated for 632.8 and 532 nm. The sensor is thin (<1/8") which makes it easy to position in the film plane.The HP-1 can be custom calibrated for most silicon photodetectors operating in the photovoltaic mode at a variety of wavelengths. For more information, see this link: 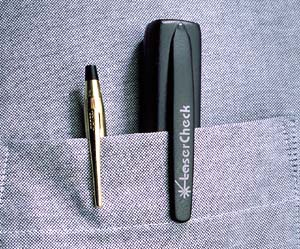 The LaserCheck is micro-processor controlled with wavelength correction, auto-ranging (µW or mW displayed), power overload warning and automatic shutoff. At higher powers the embedded silicon photodiode is protected from saturation with a built-in optical attenuator. 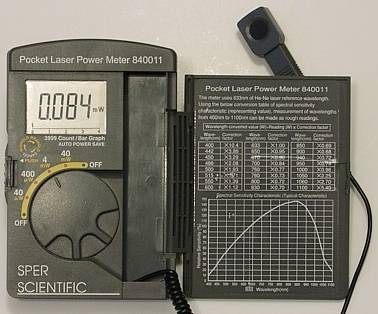 From the SPER web site

These tiny meters are less than 3/4” thick, weigh only 4oz (120g) and are easily carried in a shirt pocket. The controls, display and sensor are all neatly contained and protected within the folding case. Directions are printed right inside the cover. When open, the sensor may be extended for remote use or snaps into a fixed position atop the case. All units feature relative temperature, min-max, bar graph display, auto power off, hold functions and indicate low battery and over range. Powered by 2 button cell batteries (included). Meter Dimensions: 4.5” x 3” x 3/4” (177 x 76 x 18mm).

With the specs out of the way, how well does this meter work for holography? Very well. It holds calibration well and is easy to use with non-633nm lasers (at least it is with 532nm). The conversion chart makes it easy to figure the ballpark power output for laser not at 633nm and with the four scales it also makes a good meter for computing exposure times.

If you have a solar cell and a Ohm Meter that will read current then you simply need to connect them together. The output of a solar cell is linearly proportional to the light hitting the surface. There is no way to calibrate it but you will be able to get relative measurements quite easily. It is quite important that you do not try to read voltage as that is not a linear relationship.

Here's something you might be interested in. I just bought a thermopile meter for 300 bucks. New surplus. More are available.

In case some of you don't know what a thermopile meter is I'll explain. Most of our meters have a silicon detector or something like that. Perfect for expanded and diffuse beams but if you put a laser of any real power into it the sensor would be burnt out. Also they are small sensors, It's usually impossible to get the entire raw beam into the active area. The disk on this thermopile is 1/2 inch large. More than enough to get any holography laser into the sensor area.

A thermopile is a bunch of thermocouples in series. A thermocouple is two different metals connected, when heat is applied to that junction a voltage is produced. Thermoelectric power. When you shine a laser on the sensor disk in the thermopile it makes a voltage relative to the heat the laser is producing. It compares the target disk to the outside housing. The temp difference between the two is heat produced by the laser.

A decent thermopile is a lot of cash, the standard is the Coherent model. The sensor is 950 bucks plus the meter. There's another company called Ophir that also makes them. New they are 650 bucks, for only the sensor.

The nice thing about a thermopile is it's a broadband device, no conversions to read different wavelengths and it can handle watts of power. Pretty much any non pulsed laser we use for holography can be read with this without error, math or wavelength selector knobs.

The ophir head puts out 1 millivolt for every milliwatt of laser energy put into it. So all you really need to use it is a volt meter and a power supply to run it. If you get just a thermopile from somewhere like ebay you'll need a split power supply to run it. This Ophir model uses +12 and -12 volts dc. The finished meter I got has a dc to dc converter inside so all you need is the wall wart they supply with it.

Some of the ophir heads were put on the surplus market, new units. They were all bought up by a few people producing meters and selling them on forums.

I got this one

Here's a review of it

and here's my youtube video of mine with a 5mw red and a 150mw green.

The accuracy of this kind of meter is not in the display, it's the sensor itself. It contains a low noise op amp and the circuity to make this work. The display is just an off the shelf volt meter module in a box, so don't worry about the homemade style of this meter. It should be as accurate as any 1500 dollar meter you can buy.