So you made a hologram! But it is either not perfect or not even visible. Don't despair. We all have made holograms that are blank or have issues. I am going to run down the list of mistakes I have uncovered.

Card left in the object beam or reference beam after checking beam ratios.

This is caused by soft emulsions and/or excessive pressure during squeegeeing.

Under or over exposure. Motion of the bench or film. Beam ratios wrong.

Light entered the edge of the plate and bounced between the two surfaces. Make sure to block any light entering the edges of the plate during exposure and reconstruction.

Dust under film when laminated to the backing plate before exposure.

It is normal to only have 4 inches of usable depth. The actual depth is related to how narrow of a bandwidth you are using for reconstuction. If you are looking for greater depth adjust your development to narrow the reconstruction bandwidth. There will be a corresponding decrease in brightness. In an H2 set-up it can be the object beam was too bright. As measured at the film plane the object can not be brighter than the reference beam.

Image has Black Lines on the Object 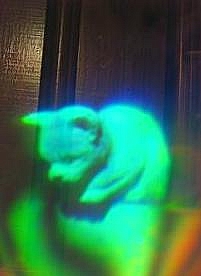 As you can see the piece of paper under the kitty moved causing the large black lines.

Entire Image has black lines on it

Laser changed frequencies during exposure (mode hop) or is running in two lines.

Laser beam was reflecting off something on the table and reaching the plate. It is important to card off any stray light from the beam.

Image has Black Lines on the Plate.

The plate was moving during exposure.

The image has black spots on the Emulsion

This is called burnout and is most common in image planed H2 copies. It can be corrected by:

Once you have identified the cause it is important to figure out exactly what corrective action will help.

This is one of the most common problems. To find out if you are stable it is useful to make an Interferometer. 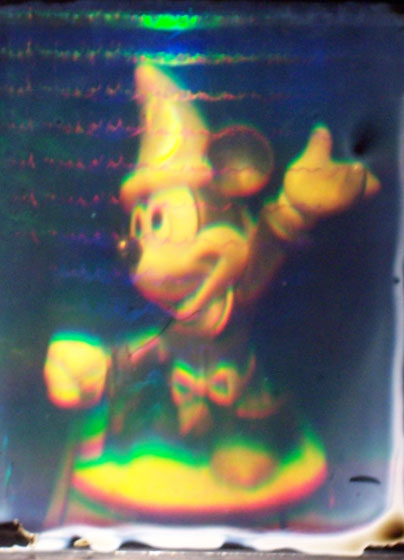 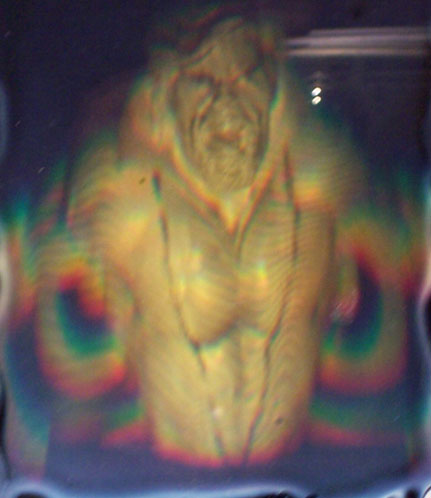 This hologram shows "woodgrain". It is caused by the laser light reflecting back and forth from the front to the back of the plate. Make sure you have the corect polarization of the reference beam and make sure the reference angle is somewhere near 54 degrees (Brewsters Angle).

This hologram shows the difficulty of making a hologram of paper. Here the paper moved, either because it was not trapped tightly enough or because it was changing humidity durring exposure. 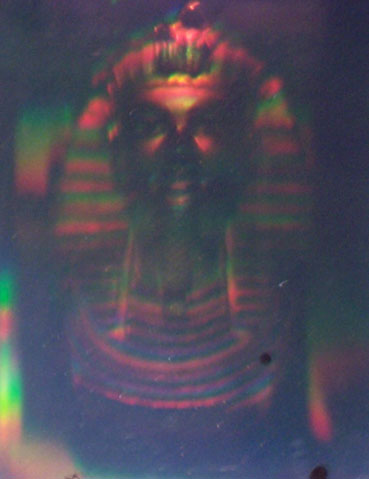 Here is a hologram showing plate movement. The dim spots do not change based on view point. 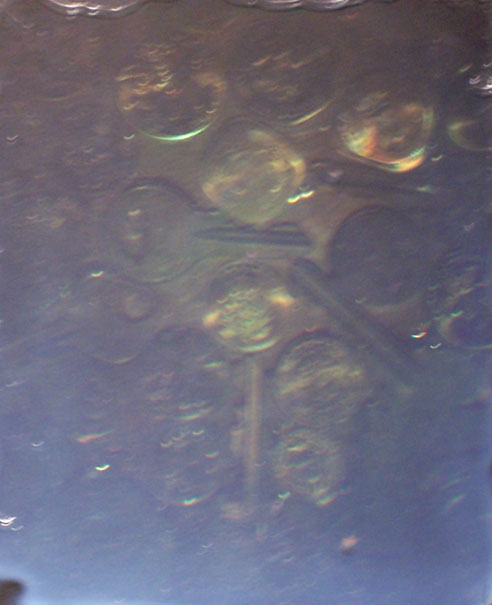 This hologram was underexposed. You can tell it is under exposed because it is dim and it is even dimmer at the edges where there was less light. If the edges were brighter then you would suspect over exposure. 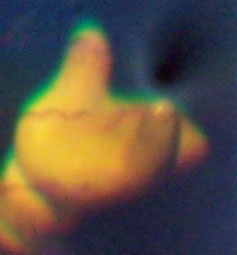 This hologram shows "Burn Out". The little finger is very reflective and was placed too close to the film plane. You can see the black smear above the finger tip.